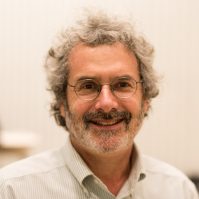 Prof. Neil Gershenfeld is the Director of MIT's Center for Bits and Atoms, where his unique laboratory is breaking down boundaries between the digital and physical worlds, from pioneering quantum computing to digital fabrication to the Internet of Things. Technology from his lab has been seen and used in settings including New York's Museum of Modern Art and rural Indian villages, the White House and the World Economic Forum, inner-city community centers and automobile safety systems, Las Vegas shows and Sami herds.

He is the author of numerous technical publications, patents, and books including Designing Reality, Fab, When Things Start To Think, The Nature of Mathematical Modeling, and The Physics of Information Technology, and has been featured in media such as The New York Times, The Economist, NPR, CNN, and PBS. He is a Fellow of the American Physical Society, has been named one of Scientific American's 50 leaders in science and technology, as one of 40 Modern-Day Leonardos by the Museum of Science and Industry, one of Popular Mechanic's 25 Makers, has been selected as a CNN/Time/Fortune Principal Voice, and by Prospect/Foreign Policy as one of the top 100 public intellectuals. He's been called the intellectual father of the maker movement, founding a growing global network of over one thousand fab labs that provide widespread access to prototype tools for personal fabrication, directing the Fab Academy for distributed research and education in the principles and practices of digital fabrication, and chairing the Fab Foundation. Dr. Gershenfeld has a BA in Physics with High Honors from Swarthmore College, a Ph.D. in Applied Physics from Cornell University, honorary doctorates from Swarthmore College, Strathclyde University and the University of Antwerp, was a Junior Fellow of the Harvard University Society of Fellows, and a member of the research staff at Bell Labs.

The Center for Bits and Atoms at MIT

MIT's Center for Bits and Atoms is an interdisciplinary initiative exploring the boundary between computer science and physical science. CBA studies how to turn data into things, and things into data. It manages facilities, runs research programs, supervises students, works with sponsors, creates startups, and does public outreach. Facilities CBA was launched by a National Science Foundation award in 2001 to create a unique digital fabrication facility that gathers tools across disciplines and length scales for making and measuring things. These include electron microscopes and focused ion beam probes for nanostructures, laser micromachining and X-ray microtomography for microstructures, and multi-axis machining and 3D printing for macrostructures. These are supported by instrumentation for processing and characterizing materials and devices. CBA's tools are available around the clock for its users working on projects that integrate these capabilities. Research CBA's projects involve collaborations with researchers from across MIT's campus and around the world. CBA personnel have participated in advances at the boundary between bits and atoms including what were among the first complete quantum computations, using nuclear spins in molecules; physical one-way cryptographic functions, implemented by mesoscopic light scattering; microfluidic bubble logic, with bits that transport materials as well as information; asynchronous logic automata, to align hardware with software; intelligent infrastructure, for energy efficiency; recoding the genome; coded folding, for programming matter; and the additive assembly of functional digital materials.
EVENT DAY 1
08:15 AM - 08:45 AM
Special Guest Keynote: The Third Digital Revolution
INFORMATION

Prof. Gershenfeld, director of MIT’s pioneering Center for Bits and Atoms and one of the founders of the Internet of Things, will look back at insights from the last fifty years of the scaling of digital technologies, and look ahead to what’s coming in the next fifty years. Based on historical data, laboratory research, and commercial trends, he will explore its implications for how we will live, learn, work, and play in a world where anyone can make (almost) anything.

Do NOT follow this link or you will be banned from the site!
[wpforms title="true" description="true" id="
We use cookies in the delivery of our services. To learn more about the cookies we use and information about your preferences, please click here. By using our Platform you agree to our use of cookies.Agree & ProceedPrivacy policy